Back to Jumbo Cards 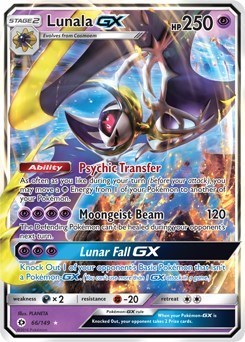 Card Number: 66
Rarity: Promo
Card Type: Psychic
HP: 250
Stage: Stage 2
Card Text: Ability — Psychic Transfer
As often as you like during your turn (before your attack), you may move a [P] Energy from 1 of your Pokemon to another one of your Pokemon.
Attack 1: [PPPP] Moongeist Beam (120)
The Defending Pokemon can't be healed during your opponent's next turn.
Attack 2: [PPP] Lunar Fall GX
Knock out 1 of your opponent's Basic Pokemon that isn't a Pokemon GX. (You can't use more than 1 GX attack in a game.)
Resistance: F-20
Retreat Cost: 2
Weakness: Dx2