Back to Diamond and Pearl Promos 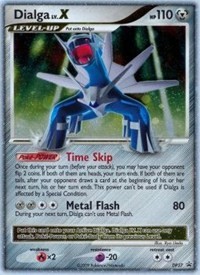 Card Number: DP37
Rarity: Promo
Card Type: Metal
HP: 110
Stage: Level Up
Card Text: Poké-POWER — Time Skip
Once during your turn (before your attack), you may have your opponent flip 2 coins. If both of them are heads, your turn ends. If both of them are tails, after your opponent draws a card at the beginning of his or her next turn, his or her turn ends. This power can’t be used if Dialga is affected by a Special Condition.
Put this card onto your Active Dialga. Dialga LV.X can use any attack, Poké-Power, or Poké-Body from its previous level.
Attack 1: [2MM] Metal Flash (80)
During your next turn, Dialga can't use Metal Flash.
Resistance: P-20
Retreat Cost: 2
Weakness: Rx2